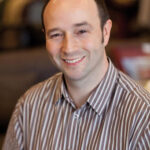 Join Alan for Cartoon Capers to learn how he became a cartoonist and create your own cartoon with him. This workshops is designed for girls and boys aged 10 and over.